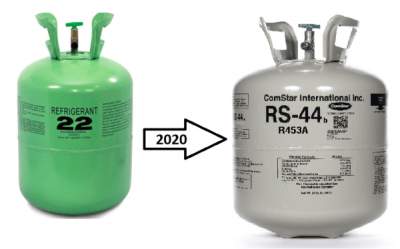 Menu
GET A FREE QUOTE

When will R-22 be phased out?
The manufacture and use of new R-22 will be completely banned starting January 1st, 2020. After that, HVAC technicians will only be able to use reclaimed R-22, and prices and supplies of reclaimed R-22 are unknown and subject to change.

The Environmental Protection Agency is phasing out R-22 because it is harmful to the environment.

How does R-22 harm the environment?
The R-22 used in home air conditioner units is comprised of chemicals including chlorine. When R-22 leaks out of an HVAC system, it rises as a gas into the atmosphere where the chlorine depletes the levels of ozone in the ozone layer.

R-22 is also a greenhouse gas, so its presence in the atmosphere contributes to the greenhouse effect and climate change.

What is the ozone layer and why does it matter?
The ozone layer is a region of the earth’s upper atmosphere that filters harmful ultraviolet (UV) radiation coming from the sun, blocking it from reaching the earth’s surface. UV radiation can cause skin cancer and eye problems.

What are some alternatives to R-22?
A number of alternatives currently exist on the market: R-410a, R-407c, M099, Rs-44b, R-422D, etc. These refrigerants are substances known as HFCs, or hydrofluorocarbons. While that seems very similar to the HCFCs like R-22, HFCs do not contain chlorine, which is the element that depletes the ozone.

How do I know which refrigerants are EPA-approved?
The EPA maintains a list of approved refrigerants, and you can contact an HVAC technician for more details.

What does it mean to “recharge” refrigerant?
To recharge the refrigerant basically means to top it off. Technicians are simply adding enough refrigerant into the system to keep the unit operating properly.

Some R-22 alternatives are considered drop-in replacements because technicians reportedly do not have to change the lubricant used in the system, but some parts may still need to be changed, and recapturing the R-22 in the unit is still a time-consuming process.

Further, while some drop-in replacements may indeed make the retrofitting process easy for technicians and inexpensive for homeowners, it wholly depends on the system that is being retrofitted.

What is involved in the retrofitting process?
Retrofitting an HVAC system to accept a new refrigerant is a different process for each make and model. It also depends on which alternative refrigerant the system will be using after the retrofit.

For some systems, retrofitting to certain alternative refrigerants is straightforward and simple. For others, it can be labor-intensive or even impossible. Here are some tasks that may be involved in a retrofit:

Recapturing the R-22: In this step, a tech will remove the R-22 from the system, containing the recaptured R-22 in a cylinder where it can be safely stored. This cylinder is then weighed.

Changing parts: Parts like gaskets, seals, metering devices, the filter dryer may need to be replaced to be compatible with the new refrigerant. The lubricant used in the system may need to be removed and replaced as well.

Leak check: Moisture and contaminants may need to be removed from the system via a vacuum pump, and the system will be checked for leaks.

Recharging the system: Once the system’s integrity has been established, the new refrigerant can be added.

Re-labeling the system: Technicians must re-label the system with the new type of refrigerant contained within.

Why can’t I just have the leak repaired in my system and be done with it?
An HVAC system cannot function effectively if its refrigerant levels are off because each system needs a specific amount of pressure within the refrigerant lines and coils in order to operate correctly. If the pressure is too low, the system will not operate as intended. Leak repairs can also be tricky, so technicians may find and fix one leak while another goes undetected.

Where can I learn more?

If you want to learn more about the EPA’s actions, you can use this informational pamphlet to learn more. If you have specific questions about the phaseout or AFC Home Club’s coverage, call 1-866-242-0629.